There has long existed a PHOENICS module called PINTO, the PHOENICS INTerpolation prOgram, which allows large fine-grid simulations to be performed in stages.

At the first stage, a coarse grid is used; then interpolation in the resulting phi file produces a second phi file corresponding to a finer grid.

This file is used as the re-start input to a second-stage calculation; of which the resulting phi-file is again subjected to interpolation and used for a third-stage re-start.

This process continues until the desired finest grid is attained; and the total time of calculation is, if the optimum number of stages is employed, significantly less than if the fine-grid calculation had been started from scratch.

The final converged solution is of course entirely unaffected by the coarseness of the earlier-stage solutions; but it is achieved more rapidly because the finest-grid operation has started from nearly-correct initial fields.

1.2 Shortcomings of the original PINTO

However the original PINTO was unable to handle the large phi-files which are nowadays common in CFD practice.

Further, because PINTO was created well before the introduction of the PARSOL technique, it made no provision for handling the pbcl.dat file, which expresses the extent to which cartesian cells are intersected by objects with curved surfaces.

A new version of PINTO has therefore been created (during 2008) which allows successive grid-refinement without the just-mentioned limitations, albeit with the some restrictions of its own:

SPINTO is entirely compatible, it should be mentioned. with parallel-computing operation of PHOENICS.

It can also, as could PINTO before it, be employed for grid-coarsening operations, should be need for coarsening arise.

2.1 How to activate SPINTO

It can be activated by issuing the DOS command:
runspin

SPINTO then looks for a file, Q1SPIN, containing its instructions; then for a phi file, and, when used for coarsening also for a q1 file, on which to carry them out.

These operations can be those of either refinement or coarsening, for reasons which will be explained below; and the result of SPINTO's speedily-conducted operations is a new phi-format file called NPHI.

SPINTO recognises the following set of commands in the file q1spin:

Lest the last section should give the impression that Q1SPIN files might long, and difficult to write, the file used for the first of the examples discussed in section is now listed as:

It is indeed extremely short.

3. Methods of working with SPINTO

SPINTO allows three methods of working. of which the first two are for users seeking to save computer time, and the third is for use in quality-assurance studies.

If the user wishes to make runs with two levels of refinement, the refinement factor being two-fold in each direction, he should do the following:

It is method 1 which was used in all three examples of section 4 of this document above, whereby it should be mentioned that, for those two with PARSOL active, it was necessary to make an initial fine-grid two-sweep run so as to create a pbcl.dat file which could be stored for later use.

3.2 Method 2; refinement of selected parts of the domain

If the user wishes to make the following sequence of operations:


then he should do the following:


Method 2 has not been exemplified below; and indeed experience of using it is not yet extensive.

The underlying idea is that, in circumstances such as are represented by example 4.3 below, in which the region of interest is small in comparison with the whole domain, a coarse grid is quite sufficient for simulating the flow in regions remote from the body; consequently it is only the region which is close to the body which requires refinement. 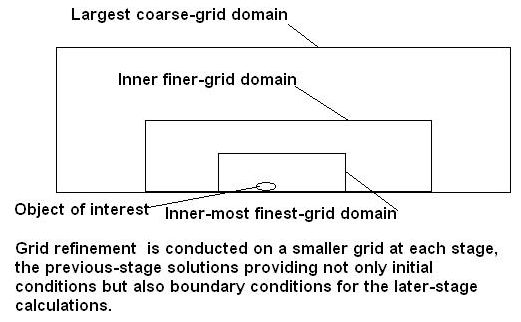 3.3 Method 3; with final check of performance

The third method is useful when the user wishes to be sure that his coarser grids exactly correspond to the finest grid after refinement.
It is especially useful when the grid is non-uniform, being made so, perhaps, to conform with the bounding boxes of VR-objects.

In this case he should make the next sequence of operations.

3.4 A script for Method 1 It would be tedious and error-prone for the user to carry out all the above steps; and for each new calculation. Therefore all the operations have been coded into the WINDOWS DOS script SPINTO.BAT.

This will now be presented and commented upon. Readers who are unfamiliar with DOS scripts (i.e. 'batch files', should note that only those lines which do not begin with REM (an abbreviation for 'remark') are acted upon.

The environment variables are changed by editing the spinto,bat file; and it is possible to give SWEEPS a different value for each run if that is desired.

PARSOL must be set equal to 1 is facetted objects are to be handled by the PARSOL technique.

The REMs in front of the PRPS-related statements should be removed if its is desired to call, at the end of the script, for a non-restart run with the finest grid. For then the original fiinit(prps) will be needed. For ease of understanding, the above script has been stripped of other statements which it is usually found convenient to include, for example those which save the intermediate results for later study.

There is much which an adept script writer can include which saves himself and others needless labour.

4. Examples of the use of SPINTO

The writing of a suitable script makes it possible to effect the grid-refinement automatically. This will now be ilustrated by reference to an example based on core library case 274, which concerns the steady flow past a crudely-represented vehicle placed in a wind-tunnel.
The Q1 file can be seen by clicking here.

If a long (400-sweep) run is made the graphical-monitor display of the convergence behaviour is as shown below:

Evidently, even after 400sweeps, with an associated computer time of 2283 seconds, the pressure field has not quite converged.
Its contours on the symmetry axis are shown below:

The script, which can be inspected by clicking here causes six 30-sweep runs to be performed as follows:

The total computer time for all these runs was 338 seconds.

The symmetry plane pressure distribution is shown below:

It is very similar to that of the 2283-second run. The final graphical-monitor output was as follows:

Evidently small sweep-to-sweep changes in the maximum and minimum variables are still occurring; but it can be concluded that the SPINTO-aided run series has produced a solution which is very nearly as good as that of the 400-sweep non-SPINTO run in less than a quarter of the computer time.

Core-Input-Library case 805 concerns the steady flow of air around a sphere, with PARSOL=T. Its grid is defined by NX=18, NY=18; NZ=31, which is too coarse for accuracy.

Increasing each of NX, NY and NZ four-fold would improve the accuracy; but the computer time would increase by a much larger factor. Therefore the stage-by-stage coarsening allowed by PINTO may bring some advantage.

This has been investigated in the following manner:-

4.3 Flow over a wide obstacle

A more extensive investigation has been made of the steady flow over the wide obstacle shown below: 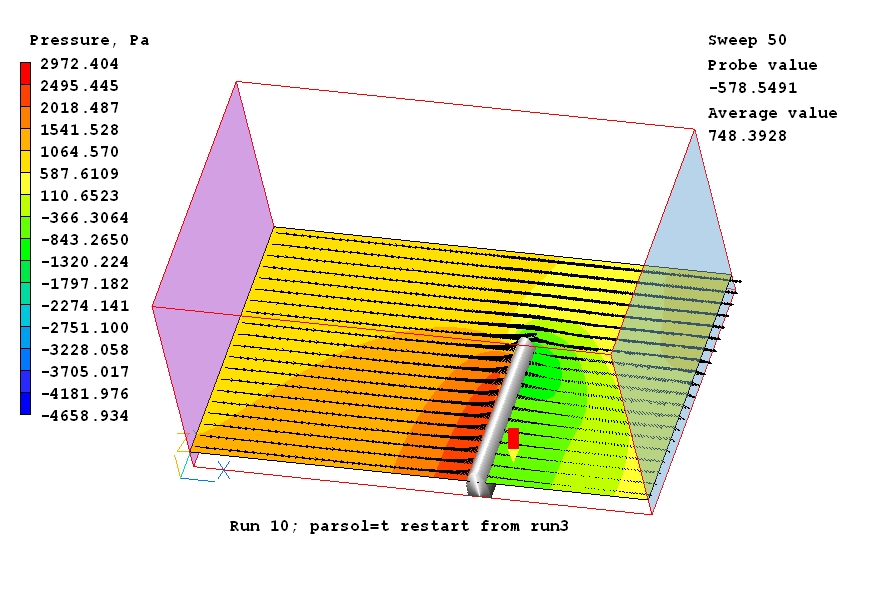 Of special interest is the flow in the immediate vicinity of the obstacle, shown in the following images: 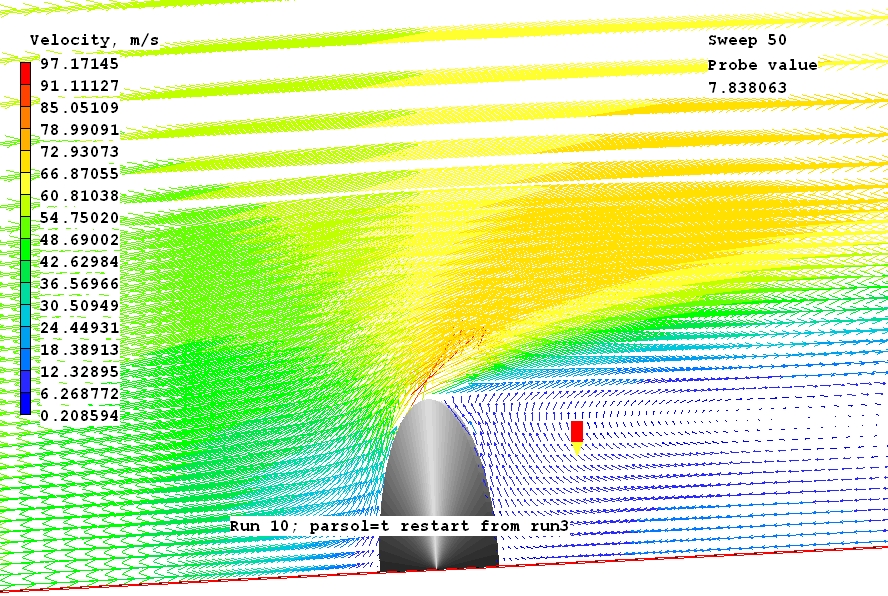 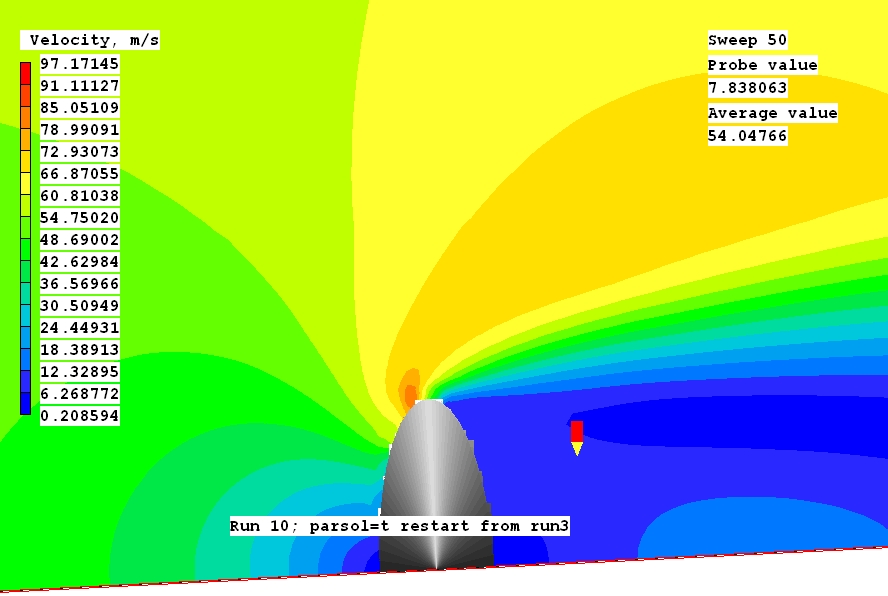 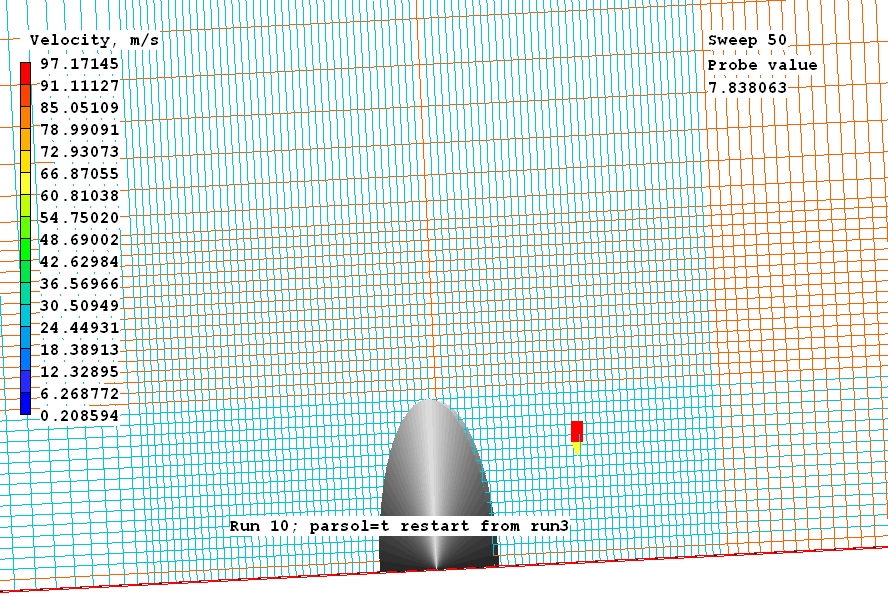 Many runs were made, both with SPINTO and without; and they showed convincingly that the use of SPINTO both increase the accuracy of the final calculation and significantly reduces the computer time needed to achieve it.

Sufficient proof is afforded by the following images, of which the first is the monitor screen of the fourth of four LSWEEP=50 runs, namely:

The graphical monitor is being used in the whole-domain-maximum-and-minimum mode.

The left-hand box shows that the maximum pressure (red curve), for example, has varied between 2.9E3 and 3.3E3 pascals during the run, and has become 2.97E3 at its end.It has not quite stopped varying; but its change in the last sweep was 2.53E-1 pascals, i.e. less that 0.01 % of the absolute value.

The right-hand box shows that the minimum pressure has also almost settled to an unchanging value, its latest change being even less than that of the maximum pressure.

Inspection of the curves and values pertaining to the other variables gives a similar impression of near-convergence.

Those results were achieved by the use of SPINTO. Now let us examine the final monitor displays of a 400-sweep run in which SPINTO was not used, shown below.

At first glance it might appear that the convergence is not bad; for the right-hand halves of the red curves appear to be nearly horizontal. However this is explained by the fact that the ranges (i.e. differences between 'low' and 'high') are much bigger than before.

Inspection of the corresponding last-change values show that the domain-minimum values of pressure are still changing at the rate of 1.96 pascal per sweep; and that the minimum pressure (-5.26E3) is still a long way from the -4.66E3 pascals shown in the previous calculation.

It is therefore justifiable to claim that the 50-sweep 'spintoed' run gave a better solution than the 400-sweep run which did not use SPINTO.

Moreover the computer time for the latter was 1723 second, i.e. more than 7 times that of the total of all four runs of the SPINTO-using calculation.

Although experience with its use is still very limited, it appears that SPINTO can indeed be a valuable computer-time-saving utility, the reason being that it enables the final expensive fine-grid run to begin with a nearly-correct initial field.

There are many variants which have not yet been tried. This document must therefore be regarded as a report on work in progress.

Information about the experiences of others who experiment with SPINTO will be gratefully received by the authors.